Hi there everyone! Welcome to my new neocities. For the forseeable future this will be the home to all my project updates going forward. None of the information shared here is confidential (unless stated otherwise), but I wanted to avoid using a format built around shares/reblogs/retweets, etc. You’re more than welcome to share excerpts or transcripts on your own.

May was so busy! Thanks to the campaign (and all of you!) I was able to move into a new apartment of my own. Moving has been a slow process, but I'm really excited about the work space I'm developing in my new home.

Some of you have probably seen the SRB2Kart mods I made during my month off, I made so many characters! I love spending my evenings and weekends on little low-stakes projects like this. It's amazing that even after a full week of making Tynk I still find gamedev fun enough to do it in my free time.

Since development resumed in May the primary focus of my dev time has been on making the game more “longevity-friendly”. When the project began in 2020, it began as me experimenting with Shaun Spaldings ARPG tutorial , and as it developed into something more material the features and content I added had to be jury-rigged to work atop the system. It was a proof of concept, so I prioritized “getting it done” over making something clean. Nearly two years of that approach later and my homonculus was due for some serious cleanup.

When choosing what to touch up and what to leave, I’ve been prioritizing the systems that carry the most weight for a game like Tynk. Dialog and sprites.

In terms of fun stuff, dialog has some new features! The textboxes now have a larger, uniform size and unique animations. There are also more text effects I'm excited to use like pauses, text animation, etc. I'm gonna miss the clunkiness of the old textboxes (and their wildly different sizes), but a uniform size means I can get more dialog to the player in less boxes, and I think that alone makes it worth it.

The biggest issue with how my dialog worked is in the scope of its implementation. The demo held all dialog in a big switch argument where every conversation had a corresponding number code, a system that works fine for simpler projects but can become unwieldy the more you do with it. The new system pulls from a database of plaintext files that can be easily edited via text edit (or perhaps a new utility program? ohoho) and will make development on my end so much smoother. I'm aware that structuring it like this opens it up to very easy access and modding and frankly - that's an added bonus!

While we're on the topic of mods, the project reached the first alternate-outfit stretch goal, meaning that Tynk is going to get one additional outfit in a system I hinted at being easy to contribute to. Most of my time this May has been spent on the structural upheaval required to facilitate such a system.

To put it simply, the game now uses structs to build a database of sprite information, with both playable characters having a default set of values and then any number of potential additional sprites. For example:

Tynk's minigame sprites are stored in this set of "default" sprites, but it is not required that every new spriteset completely accommodate all these additional drawings. Instead, any missing animations in a new spriteset will be replaced by the default sprite's corresponding animations.

You can leave any spots you want blank and the game will make do.

As an extension of this, Tynk's head now exists as a separate sprites to support facial expressions during the general animations. If you want to make a skin for Tynk but don't feel like making alternate faces for every possible emotion in the game, implementing only the neutral one will mean they never make any other expressions, thus keeping your mod seamless. 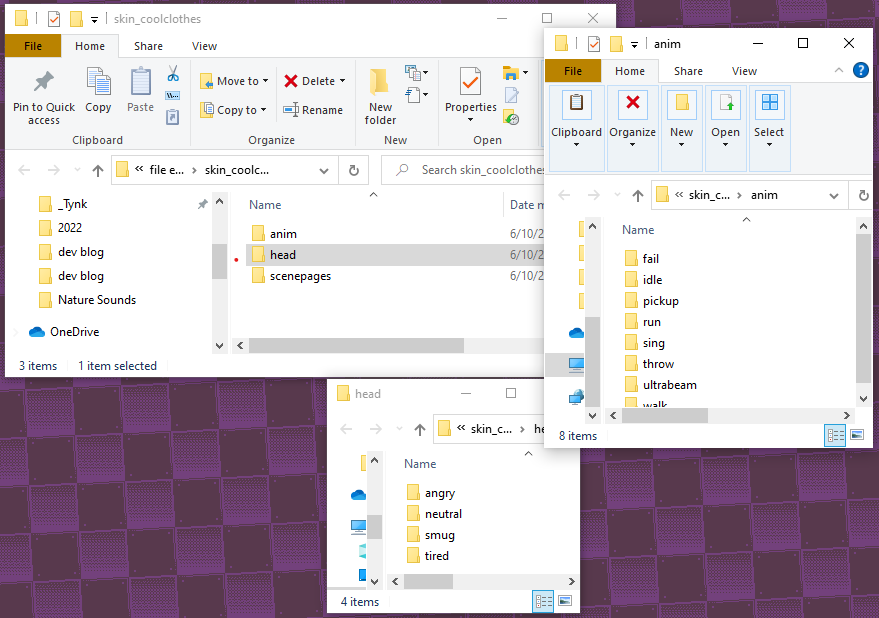 This is a mockup of how I think any given custom spriteset would be structured for the game to pull from and implement. It's a little verbose, but I think it at least allows for clarity in regards to what sprites you're changing and why. If I have the time and resources too it'd be nice to make a little development tool to package these in a more accessible way, but I doubt I'll be getting that granular right now. After all, I can't technically complete this system until I know every single character sprite that will be in the game, and that won't be for quite some time.

While we're in the neighborhood, Tynk has had a bit of a makeover himself! The colors of his fur have been shifted better fit the environment and add more contrast with his eyes, with some higher contrast dithering to allow for a more GBA-era sprite feeling.

Right now I intend to spend some more time with the aforementioned systems for the month of June, but starting July I will be reaching out to those with creative backer rewards to get a sense of what their inclusions look like. If all goes according to plan, then fulfillment of the physical rewards should start to roll out around the end of August. More updates on that in the next blog post.

Upcoming Updates: What to Expect

These updates won't be coming out in any sort of set schedule, but in general the aim is to have one somewhere around every 1-2 months. It is honestly quite a lot of work to organize my progress into an easily communicated format, so I don't want to bloat up my limited schedule by doing them too often. Length will vary greatly, as well. Development slices like this that are very system-heavy are easy to talk about but when work on the game revolves around narrative content I'm going to have to be more withholding.

The Future of the Tynk! Discord

I owe a lot to the kindness and the hype of the Tynk! discord server. So many of you showed up to help get eyes on this game and made me feel like a micro internet celebrity. Watching the general chat blow up on the night we met the goal is going to stick with me forever, I think. That being said, managing social media and the Tynk server during February was harder than any game development I've ever done. Making sure that people are safe and having a good time on the server is honestly really out of my wheelhouse, and considering how many people are on there at this point it's become quite a daunting responsibility.

After talking a good deal about it with my therapist, I think the best course of action for my mental health (and also the development of Tynk!) is to close the server down. I won't be deleting it outright right now, but on June 22nd it will be set to read-only until it's time to start marketing for the games release.

If any of you want to make your own fan servers you're more than welcome to do so, I'd even be happy to provide the source files for all the wonderful emojis we have. Just remember to keep vulnerable information private even in really friendly spaces, some really vile stuff can happen on the web if you're not careful!

While I'm enjoying being largely absent from social media, I don't want you to think I'm inaccessible for questions regarding the game. You are always welcome to send me an ask on my Tumblr, or shoot me an email at VirtualMothVG@Gmail.com for any inquiries about the game, rewards, etc.

I also thought it could be fun if I had a little letter-reading section at the end of these development posts. Either for answering questions about the previous post, the story, or development in general. If you'd like to have a question answered in this format, shoot me an email with "[DEV MAIL]" in the subject line and I may answer it here... if I can think of an interesting answer.

Thanks for reading, and happy pride!