Happy impending autumn! The long sunny hours are just about the only thing I’m going to miss about this summer. I want to catch everyone up on what I’ve been up to in the past few months, but just as a warning; it involves car accidents, illness, and other general miseries. If you want to skip to the gamedev stuff you're welcome to scroll past!

In July I was involved in a car accident where my car was totaled. I thankfully wasn’t hurt, but it has left me with a lot less autonomy as I had not budgeted to replace a car (and have continued to postpone figuring that out). On top of that I had to suddenly figure out getting a root canal as some occasional tooth sensitivity graduated to full-on daily pain and migraines.

Near the entirety of my August was eaten by catching COVID. I managed to shake most of the symptoms after a couple of weeks, but I’m still bugged by the exhaustion and the coughing it left behind.

Throughout all of this, I’ve been battling my new apartment’s desire to leak water through and into my apartment. At first it seemed like the typical amount of damage and maintenance for lower-income housing, but it has escalated to the point where, as of a few days ago, more than one of my neighbors have had their ceilings collapse in on them due to the constant damage.

As of right now it’s clear to me and my roommate that we’re not safe staying at our apartment anymore, so for the moment I’m between housing situations as I try to figure everything out.

I’d be lying if I said it hasn’t been a demoralizing few months. Obviously when you work from home it really matters how your home feels, if you’re safe, etc. The good news is that I’m staying somewhere safe, I have the support of the best friends a woman could ask for, and solutions are already in motion.

As outlined in my first update, I did reach out to backers with #Creative tier rewards to start collecting info on their contributions. Here is the general rundown:

I’ve been talking most with backers who are contributing characters so far. Since their contributions are the most narratively sensitive I’ve been trying to develop enough foresight to know when and where the character cameos fit best as I develop the game. In general it’s been going really well! Quite a few folks sent me some characters that really gel with the tone of Tynk!, even providing some fitting character designs to boot. There are some characters without matching designs to work on, but the ideas behind them are equally exciting and fun.

I’ll admit, I had my doubts about opening up my game to character contributions from strangers, but I’m really happy to say that in general the people who have supported the game that much have a strong grasp on what I’m going for, and have contributed something genuinely meaningful to it.

The feeling of movement in Tynk is among the most divisive elements of the demo – Tynk walks slowly, and runs very quickly. Some people found the controls to be refreshingly quick for a design style that often forces players to move slowly through the world, while others found the speed too unwieldy to navigate around the tighter corners.

Not to mention that I, in particular, like to go very fast.

I spent quite a bit of time coming up with a solution to this problem that offered freedom instead of choosing a play experience to favor. Let me share it with you!

So the player now has three primary speeds. Walk, Trot, and Run, and switching between them has a bit more nuance. When the character trots, they move at a speed between walking and running. You can start trotting by holding the run button while moving, and if you trot for long enough you’ll escalate into a full on run, complete with a brief boost forward!

But what if you hold the run button while motionless? Then, the player enters a “Wind-Up” state where their arms tuck in – ready to bolt. Moving while in this state will launch the player directly into the run state. So if you’d like to move top speed immediately that option is available to you.

Here’s a sneak peek at an ability Tynk unlocks later on in the game. Dodge roll with ease around the map to avoid projectiles and bonk into things!

I’ve changed the general structure of Tynk’s sprites one last time to accommodate palette shifting. You see, in the default palette Tynk has a few colors that serve as shadow colors for both her hair and her fur, but what if I want to make the palette of an area bring out the greens and push out the blues? I needed more control over when colors were shared and when they are not, so…

BEHOLD! The secret, slightly-ugly true Tynk palette that can never be seen in game. Making her shading colors markedly different makes it very easy to choose when and where they share colors in other palettes. This palette system will also be easy to customize, it pulls from a single “palette” sprite that is defined with the rest of the skin. If you’d like to read up on how it works, you can actually check out the system here! While it goes against my brand as a “Potential Indie Darling Savant Gamedev Computer Genius”, I found this tool while researching how to make my own, and it works exactly the way I had wanted it to.

I gratefully took the opportunity to save some time.

So How is the Story?

With both this update and the last being about more under-the-hood planning and mechanical decisions, I’m presuming you may be curious about progress on the game from the point of the demo forward! The truth is, I still haven’t moved in that direction yet. Partially because life has slowed me down, partially because I wanted to have all my ducks in a row before I started piling assets on my new structures.

I’ve been outlining the narrative on paper and preparing music and color guides for Chapter 2, but there’s nothing concrete yet that I’m ready to show you. I want to wait until there’s more cohesion. If it sates your curiosity, though, you can have this sneak peek of a song for the main area of the chapter:

However! I have been rebuilding and slightly restructuring the original chapter with some design changes, story tweaks, etc. Take a look at the dialog tool I’ve been developing with Jade (she’s been developing it, I just suggest design modifications here and there). It makes it so easy to take the demo dialog and transplant it in a system that is more dynamic and expressive. 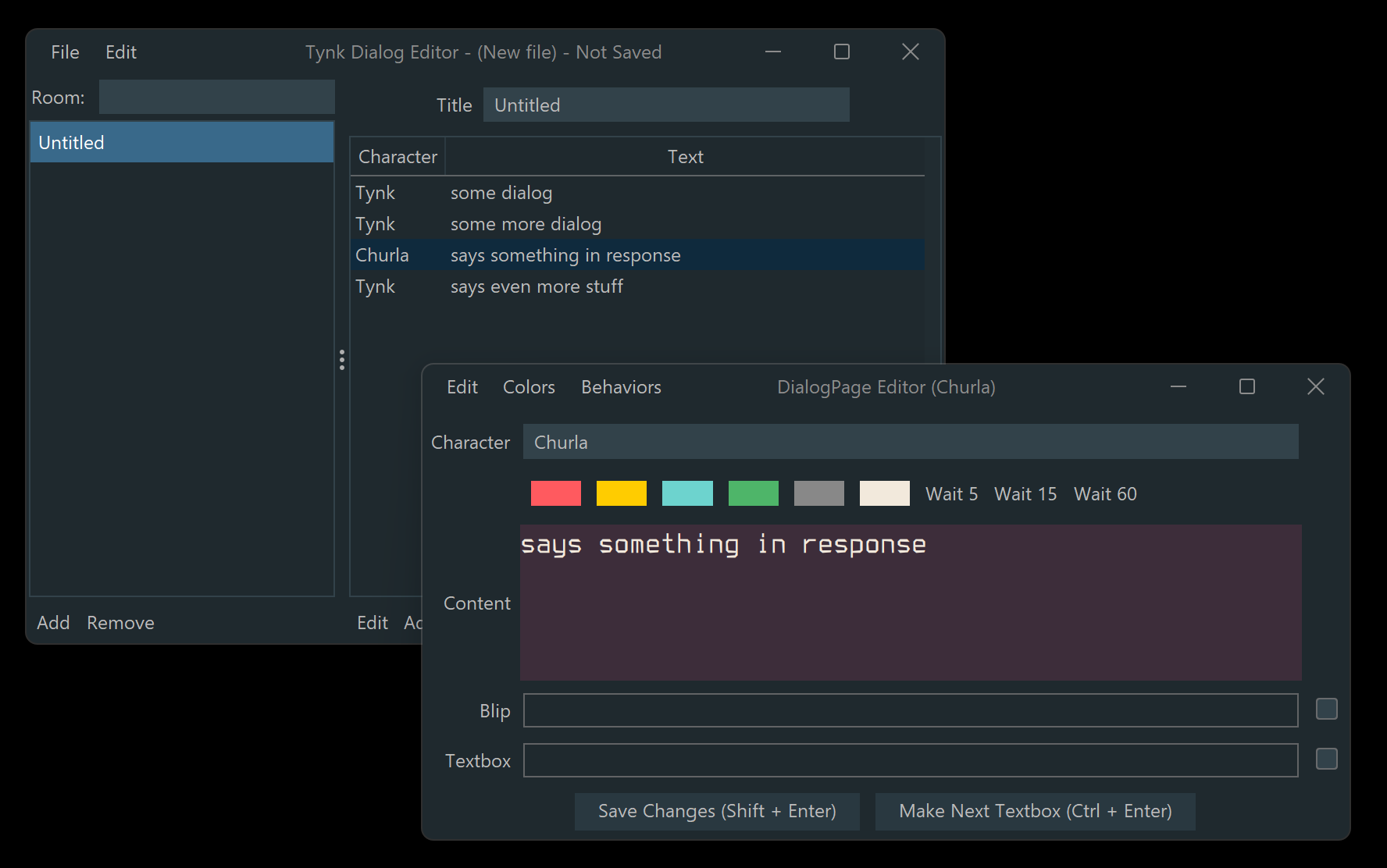 I’m hoping to host a development stream sometime in December where I play through the first chapter again and outline how things have changed. I’ll have more details as my life (hopefully) finds solid footing again, but that’s my current look forward!

So as some of you may have noticed August came and went without anyone parading around in an exciting, stylish tynk t-shirt designed by Logan Spoto. Since it doesn’t have to do with the development of the game directly, it’s been easy for me to postpone the physical rewards as things get stressful. I want to curb this pattern. Unfortunately, I won’t be able to invest in the physical rewards until things calm down in my personal life. Most of the Tynk funds are just to help me pay my bills, and if I’m faced with a giant bill in the coming weeks I’m gonna need to do some restructuring before I pull a bunch of money for rewards as well. I won’t allow the physical rewards to go unfulfilled, I just need to do this carefully and thoughtfully. Rushing it would do both of us a disservice.

I’ll keep you updated on these in the next update. I’d really like to get them mailed before the year is up. I’ll have a better idea of my budget for the year in a few weeks.

This is the section where I answer questions about development and about Tynk! If you’d like to ask a question, you can send me an email at VirtualMothVG@Gmail.com (or send me an ask on Tumblr!) with the subject [DEV MAIL] and I’ll consider it for the next update!

Will you ever publish an art book of your development process? Maybe a pdf with some of the very first concept sketches?? I'd love to see it!

I would love to! I’ll be releasing a digital art book to specific backers first and foremost that largely fits that bill, but post-release I think it’d be really nice to build a more formal annotated book. I’m sure learning what people do/don’t resonate with in the final game will inform what I spend time archiving in a book like that, too.

what has been the most rewarding thing (feature, dungeon, animation, etc) to work on and flesh out during development? Without giving too much away, of course :)

So far the most rewarding element has definitely been animation! I really miss the more narrative phase of development and sprite design feels like one of the rare times I actually get to do some character writing – even if all that amounts to is what face I’m drawing on Tynk.